The cultivation and fishing of Native Oysters has been carried on in the Rivers and Creeks of east Essex since Roman times. The Romans found local Oysters to their taste and began shipping them back to Rome by dragging them in nets behind their ships. At times in the past, Oysters have formed an important part of local people’s diet as a cheap source of protein. In 1851 it was estimated that half a billion Oysters were sold at Billingsgate Market in London. 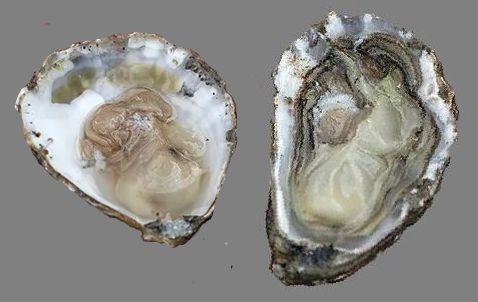 By 1900 overfishing of Oysters was happening and untreated sewage pouring into Rivers lead to a number deaths due to polluted Oysters. Some Councils then ordered the closure of many Oyster beds. Some bad winters and a parasite called Bonamia meant that by 1980 the native Oyster had vanished from many parts of the country, surviving in just a few enclaves including the Essex mud.

But in 2012 a survey revealed that the Native Oyster population was close to collapse.

So the Blackwater, Crouch, Roach and Colne Estuaries Marine Conservation Zone was designated. It is hoped that the native Oyster population will be saved and re-established

The Blackwater Oystermen’s Association which has operated in the local estuaries for hundreds of years agreed to stop harvesting the Native Oysters. However, the non-native Pacific or Rock Oysters can still be caught.

The Pacific or Rock Oyster is an invasive species introduced to Britain or possible escaped from oyster farms. The Blue Point Oyster can also be found another introduced species. Also of concern is the Slipper Limpet which live in heaps below the low water line.