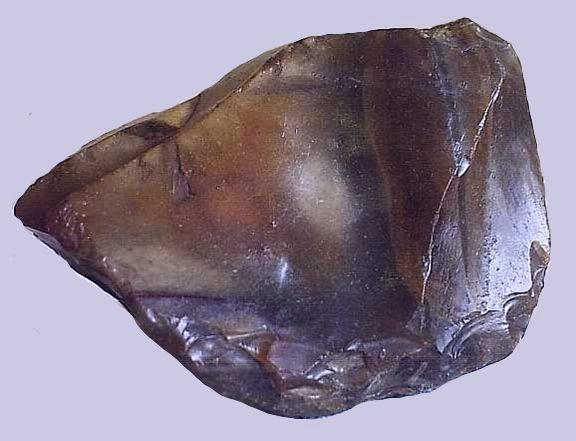 The Quaternary Ice Age ended 10,000 years ago at the start of the Mesolithic (Middle Stone Age) period. During these times humans were nomadic hunter – gatherers. Their diet consisted of hunted wild animals such as deer, elk, wild boar and auroch (wild ancestors of modern cattle) as well as berries, seeds, grains and nuts. They also ate acorns and some plants today we call weeds such as dandelions. Insects were also eaten.

The clearing of woodlands and the creation of farms led to the domestication of certain animals (Oxen, Pigs etc.) and the he use of domestic crops.

The discovery and use of the metal alloy bronze for tools and ploughs led to improved effectiveness and more efficient farming techniques. 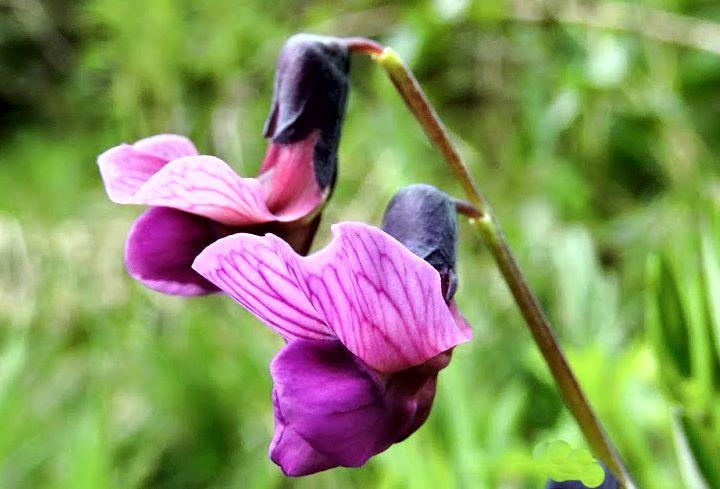 Emmer Wheat, Einkorn Wheat, Millet, Bitter Vetch and Hulled Barley became a more important part of the diet, but fruit, berries, seeds and pulses were still important together with both wild and domestic animals. The making of bread was also becoming more common.

The Iron Age brought further improvements with tougher tools and more efficient farming. One family was able to produce more food than they needed. So crops were stored in granaries and surpluses were traded for manufactured goods.

Drainage ditches were introduced to improve the soil and provide irrigation. 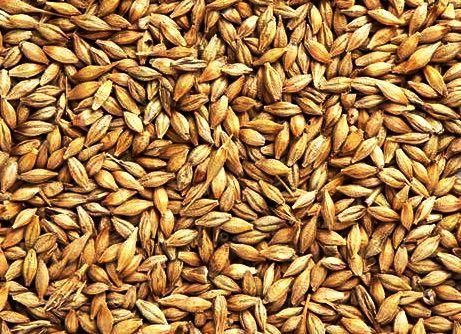 Corn, Barley and Millet were still grown but wheat had become the predominant farmed crop.

Eighty per cent of the Iron Age population were engaged in agriculture.

The Romans brought not only different tools and techniques, but they also introduced a great variety of new foods. But the colder British climate was not suitable for some of the Mediterranean crops such as olives. But grapes were found to grow in southern England.

The Romans increased agricultural production and the area under cultivation to cater for the additional population. They also levied a tax, the Annona Militaris, which was a percentage of the farmer’s production.

The Romans also introduced new and improved tools such as the two handed scythe and a new shape of sickle. New plough designs were introduced and they built granaries above ground to improve storage conditions.

New foods and varieties were to appear including cabbages, onions, carrots, cucumbers, parsnips, leeks and turnips. New fruit varieties were introduced including apples, plums, grapes and cherries. The Romans also brought peacocks, guinea fowl and deer. The Romans were also very fond of the local Oysters and it is thought they shipped them back to Rome in large nets towed behind boats. Domestic cats were also introduced and according to some sources the stinging nettle.

During the Anglo Saxon Period most of the population still worked on farms. They raised chickens, goats, pigs, sheep and cows as well as oxen to work the plough. Animals supplied not just meat but also eggs, milk, wool, leather, cooking fat and tallow for candles.

Much grain was grown for bread. Vegetables such as cabbages, peas, parsnips and carrots were widely produced. Fruits such as raspberries, blackberries and apples were cultivated and fish formed part of the diet where suitable sustainable sources existed.

After the Norman Conquest the Normans displaced many tenants and confiscated their lands. These lands were called demesnes. The displaced peasants were now the labour force for the Norman Lords.

The Open Field System was used throughout much of Europe during the middle ages. In a typical Manor the land and rights were granted by the King or Queen to the Lord of the Manor who held Manorial Court and maintained law and order.

In St Osyth after 1118 it was the Abbey that held the rights. St Osyth Abbey also held the rights for many other manors and villages in Essex and Suffolk. The Abbey collected rents, market fees and had strict control over the land and people working on the land. Rents or tithes were often paid in produce hence the need for a large Tithe Barn at the Abbey. The Tithe  was generally about a tenth of whatever the land produced. All cereals had to be milled at the Priory Mill. 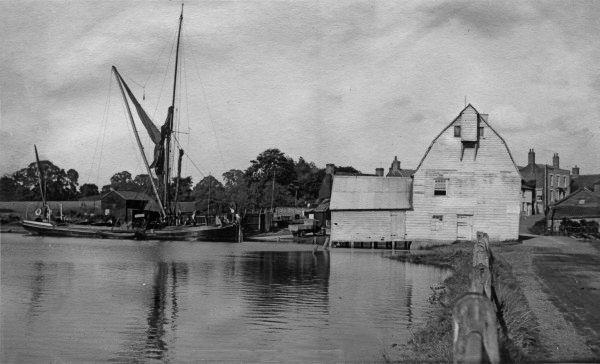 Typically a manor or village would be surrounded by 3 or 4 large fields which were divided into narrow strips called Selions. These were cultivated by peasant farmers or serfs who would pay rent to the Abbey or the Lord of the Manor.

Peasants would also have to work on the Lord’s personal land. The serf was tied to the land and had work several days a week for the Lord. Life was very difficult for the family of a serf especially times of drought or crop failure when many would not survive.

The serf’s clothing was rough wool or linen. The women wove the cloth and made the clothes and as they normally had only one set they were very seldom washed. In cold winter they would wear cloaks of sheepskin or wool.

The Normans extended the Manorial System of land ownership with villages clustered around the manor house or church. The population spent their entire lives tied to one village or manor. Many forests were cleared and the value of manure as a fertiliser was recognised and had a sale value. 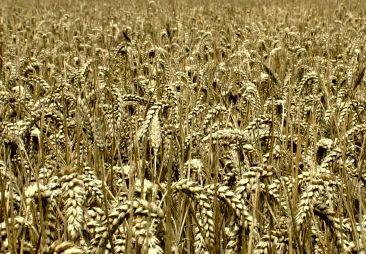 Wheat was the main grain cultivated but they also grew barley, rye, oats, beans, peas and other vegetables.

Horses were used more and more to do farm work such as ploughing and pulling carts. Horse Collars were perfected and the horses proved to be longer working and faster than oxen. 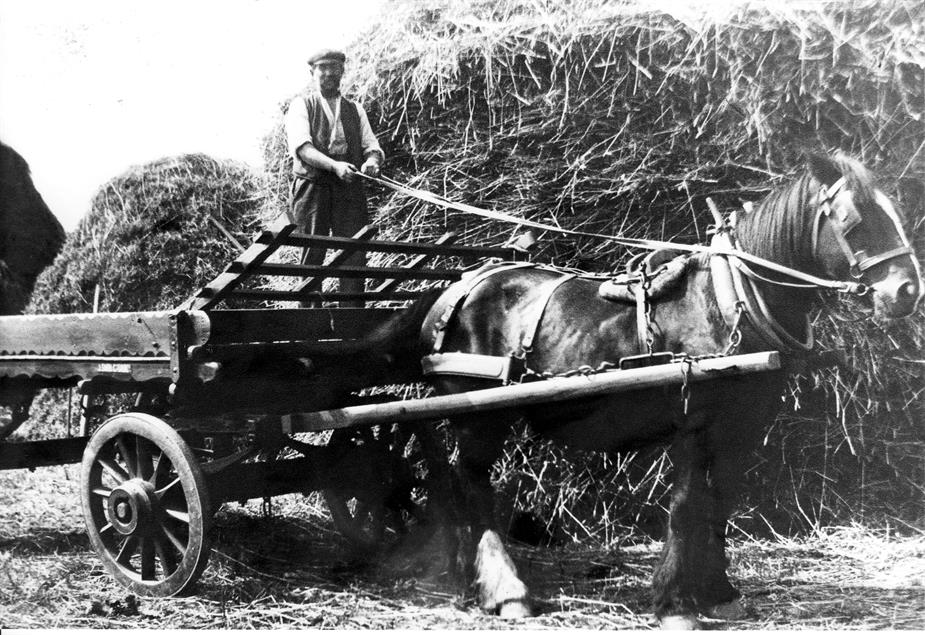 In the 15th century the pattern of farming began to change with the enclosure of land. The large fields were fenced and exclusive rights obtained or purchased. This process lasted until the late 18th century. This brought in smaller fields, the loss of common land and the trading of land as a commodity.

Agriculture and the Dissolution of the Monasteries

Throughout the middle ages it was the monasteries who had been increasing their land ownership. By the time of the Dissolution it is estimated that they owned about one third of the total land area in England. 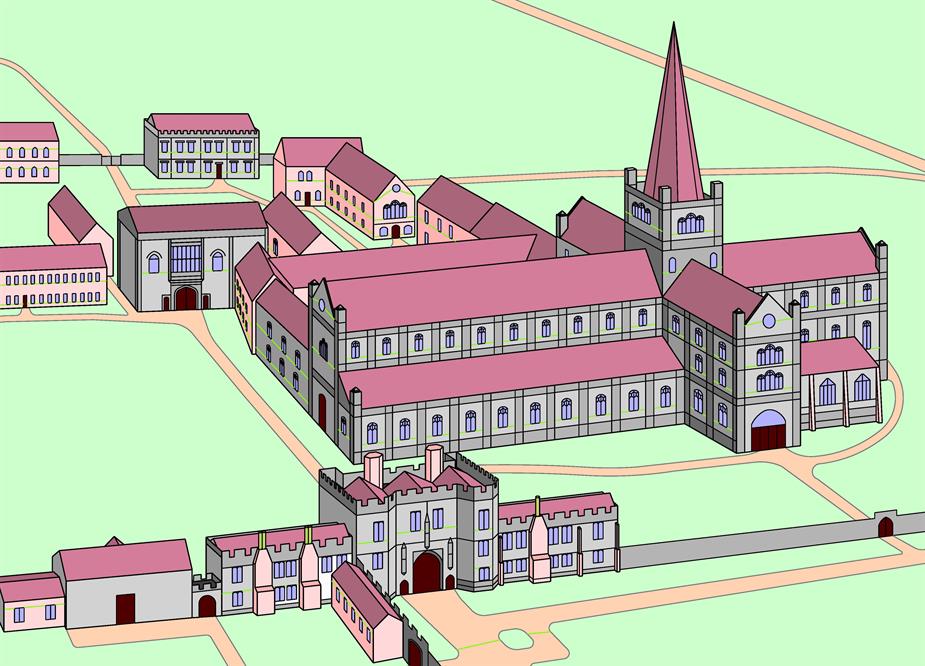 But for St Osyth the Dissolution of the Monasteries in 1539 brought new owners at St Osyth Priory, but the obligations of farmers and workers to the owners did not change, in fact the new land owners often treated their tenants more harshly with few of the social side benefits.

During the 18th and 19th century crop productivity increased dramatically due to technological improvements and better farming practices. During this period the introduction of seed drills and mechanised horse drawn harvesting machinery gradually increased productivity. The introduction of new rotation and planting methods improved poor soil. Fertilizer fixing plants such as legumes (peas, beans and clover) enabled more land to be brought into agricultural production. Crops such as potatoes and turnips also enriched the soil as part of a rotation system. Selective breeding led to more productive farm animals. 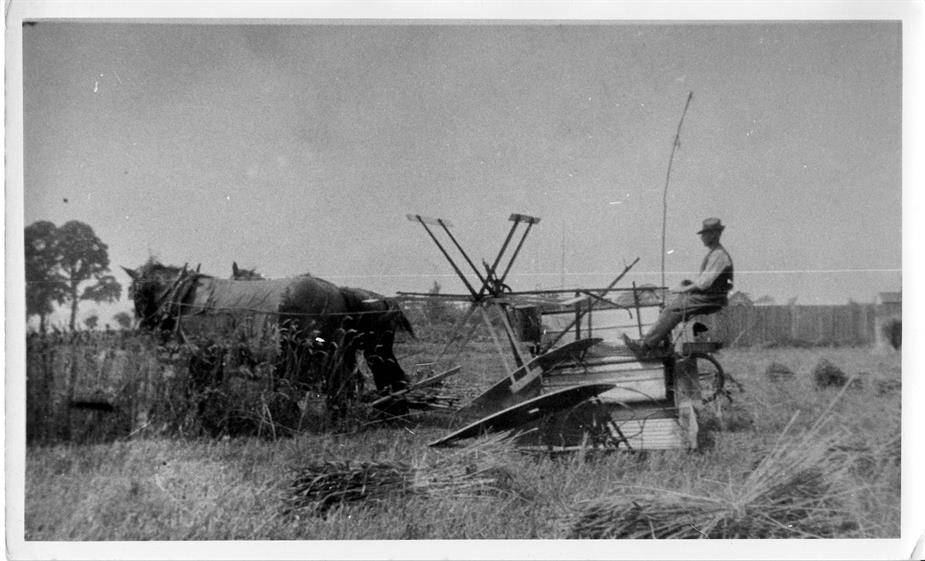 Mechanisation and improvements meant there were less farm workers needed and the redundant farm workers provided the workforce to enable the Industrial Revolution to be so successful. So many workers left the poverty of the countryside to live and work in the industrial towns and cities. But many were disappointed when they found living and working conditions to be worse than in the country. Pay was low, housing was overcrowded and disease swept quickly through the urban population. Work was also unpredictable and there was no social provision should the breadwinner die or become unemployed. Working days were very long and working conditions were often appalling. Women and young children were often preferred as workers in the mills and factories as they were cheaper. 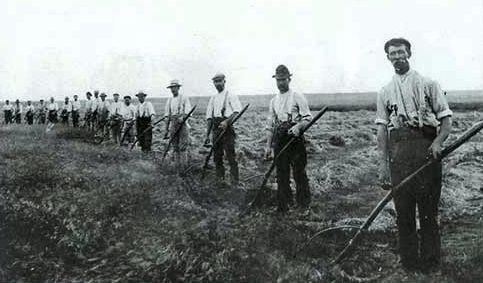 Further improvements in agricultural productivity continued as new more efficient equipment was introduced. The steel plough arrived in the 1830s as did the canning of food. The 1850s saw chemical fertilizers being tried and 1868 brought the first steam powered tractor. The gasoline powered tractor followed on 1892.

Agriculture during the World Wars

The Agricultural industry suffered a shock during World War One. Many farm workers left to fight at the front and up to half a million farm horses were requisitioned by the military. Whilst this was happening the German submarines were trying to blockade Britain and cut off food supplies. Nearly 100,000 women were drafted into the Women’s Land Army and with the help of imported American farm equipment were able to dramatically increase agricultural production and feed and save the country. 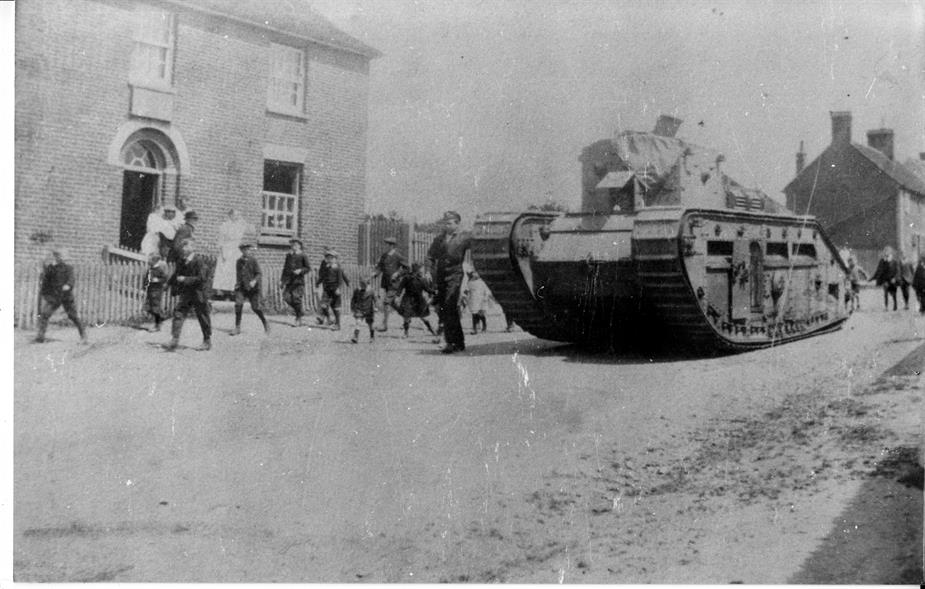 In St Osyth hundreds of troops were stationed around the village and with them came hundreds of horses and they also needed feeding. In Tendring and St Osyth there was an influx of Scottish farmers buying land.

The post WW1 years saw a dramatic drop in the value of farmland as overproduction followed the war. An enormous amount of land changed hands at low prices as farmers could no longer afford to work the land. But along came the Second World War and once again the agricultural sector was asked to maximise production and it rose to the challenge. Again the normal food imports from the continent were not available and again the Nazi U boat packs tried to blockade Britain by sinking ships bringing supplies from America and the rest of the world. And once again women answered to call to become ‘Land Girls’ to replace the workers called up for military service. Approximately 80 thousand women endured long days of hard work and often primitive living conditions to help win the war.

After the war there was still a need to increase food production. Rationing was slowly phased out but was to be a part of life until 1953. Technological advances, chemical fertilizers and pesticides meant production per acre were getting higher. Between 1885 and 1945 the wheat yields remained constant between 2 and 3 tonnes per hectare but between 1945 and 2010 it steadily to rose approximately 8 tonnes per hectare. 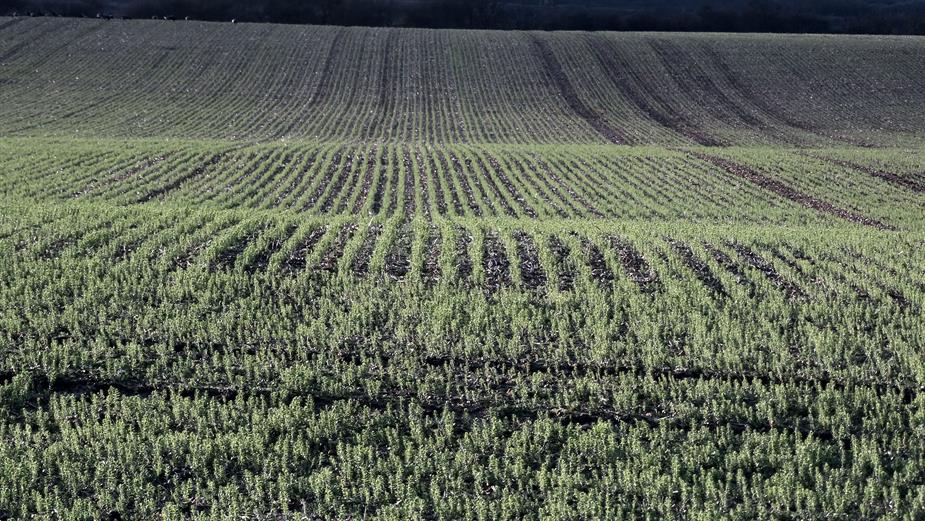 Pertwees in Colchester were seed merchants breeding new varieties of grain and potatoes. They used contract growers in St Osyth such as the Henscombs at Whyers Hall Farm.

In 1951 foot and mouth disease struck the country and the Priory’s herd of White Park Cattle had to be slaughtered along with many ordinary cattle. White Park Cattle are a rare and probably the most ancient breed of cattle native to the British Isles.

Pesticides have contributed to this rise but have caused controversy along the way. Their origins can be traced back to sulphur dusting used in Mesopotamia 4500 years ago. 4000 years ago poisonous plants were being used for pest control. In the 1400s arsenic, mercury and lead were used, in 1600 nicotine sulphate and during the 1800s Pyrethrum and Rotenone. Even in the 1950s Arsenic based insecticides were used and in 1975 organochlorines such as DDT were also used. Many of these older pesticides caused environmental damage when they escaped as run off or failed to decay and built up in the food chain. 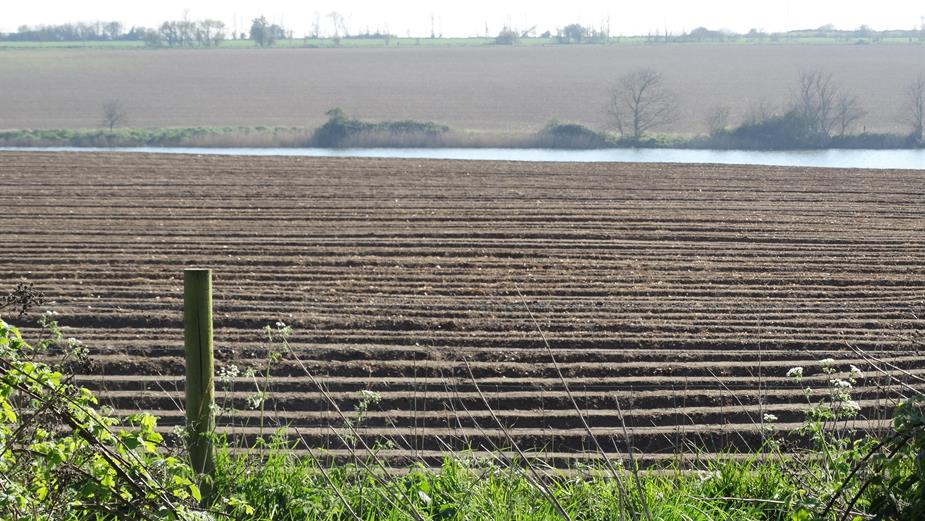 Today genetic modification has produced disease resistant varieties of plants and GPS controlled selective crop spraying can vastly reduced the amount of pesticide needed and minimise the amount of run off.

The advances in agricultural technology and techniques has seen a dramatic fall in people working on the land. In 1900 approximately 40% of the population worked on the land, by the year 2000 this had fallen to 2%.